Posted on January 21, 2012 by thebridgeseries 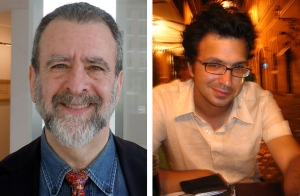 Jonathan Cohen is an award-winning translator of Latin American poetry and scholar of inter-American literature. He has translated Ernesto Cardenal, Enrique Lihn, Pedro Mir, and Roque Dalton, among others. His own poems and essays have appeared widely. He is the author of pioneering critical works on Pablo Neruda and Muna Lee. The compiler of William Carlos Williams’s poems from the Spanish, he currently is preparing a new edition of Williams’s translation of the Golden Age novella, The Dog & the Fever, by Pedro de Espinosa.

Daniel Borzutzky is the author of The Book of Interfering Bodies (Nightboat, 2011); The Ecstasy of Capitulation (BlazeVox, 2007) and Arbitrary Tales (Triple Press, 2005), as well as several chapbooks. His translations include Raúl Zurita’s Song for His Disappeared Love (Action Books, 2010) and Jaime Luis Huenún’s Port Trakl (Action Books, 2008), among others. His work has been anthologized in, among others, A Best of Fence: The First Nine Years (Fence Books), Seriously Funny (University of Georgia Press, 2010), and Malditos Latinos Malditos Sudacas: Poesia Iberoamericana Made in USA (El billar de Lucrecia, 2010).  Journal publications include Fence, Denver Quarterly, Conjunctions, Chicago Review, TriQuarterly, and many others. He lives in Chicago.