Posted on May 6, 2012 by thebridgeseries

A Reading and Discussion with 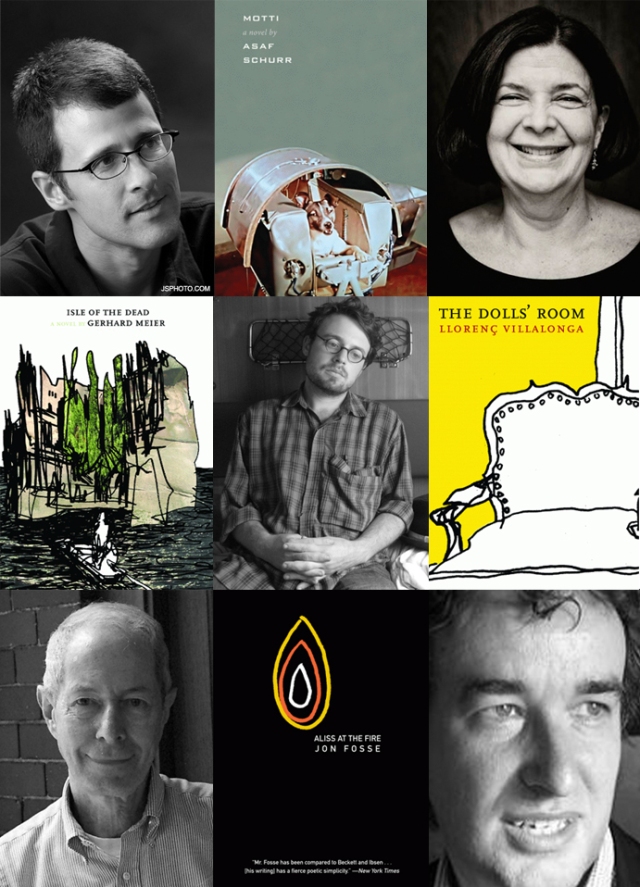 Joshua Cohen is the author, most recently, of Witz (Dalkey, 2010). A collection of short stories, Four New Messages, will appear this August. He has written for Bookforum, Harper’s Magazine, the London Review of Books, the New York Times Book Review, and other publications.

Todd Hasak-Lowy is the author of Here and Now: History, Nationalism, and Realism in Modern Hebrew Fiction (Syracuse University Press, 2008), a short story collection (The Task of This Translator, Harcourt, 2005), and a novel (Captives, Spiegel & Grau, 2008). He has a PhD in comparative literature from UC Berkeley, and from 2002-2010, he was a professor of Hebrew Literature at the University of Florida. His translation of Asaf Schurr’s Motti was published by Dalkey in 2011. He is currently at work on a translation of Dror Burstein’s memoir Netanya.

Mary Ann Newman, former Director of the Catalan Center at New York University, is a translator, editor, and independent scholar who specializes in Catalan culture. Her most recent translation was Quim Monzó’s Gasoline (Open Letter, 2010); she has also translated such renowned Catalan writers as Xavier Rubert de Ventós, Joan Maragall, and Narcis Comadira, among others. She is currently working on a novel by Marta Rojals, Spring, Summer, Etc. In 1998, Ms. Newman was awarded the Creu de Sant Jordi, the highest distinction bestowed by the Catalan government.

Burton Pike is Professor Emeritus of Comparative Literature and German at the CUNY Graduate Center. He edited and co-translated Robert Musil’s The Man Without Qualities (Vintage, 1996) and a book of Musil’s essays, Precision and Soul (University of Chicago Press, 1990), as well as Goethe’s The Sorrows of Young Werther (Modern Library, 1993). For Dalkey, he has translated Rilke’s The Notebooks of Malte Laurids Brigge and Gerhard Meier’s Isle of the Dead. His translations of prose and poetry from German and French have appeared in Fiction, Grand Street, Conjunctions, Chicago Review, and other magazines. He’s been the recipient of Guggenheim and Fulbright fellowships, and he is currently a member of the PEN Translation Committee.

Damion Searls is a translator from German, French, Dutch, and Norwegian, mostly recently of Nescio’s Amsterdam Stories (New York Review Books, 2012) and a biography of Martin Kippenberger, Kippenberger: The Artist and His Families (J&L Books, 2012). He has received a Guggenheim Fellowship, and his 2010 translation of Hans Keilson’s Comedy in a Minor Key (FSG, 2010) was a New York Times Notable Book and National Book Critics Circle Award finalist. Dalkey has published Searls’s book of short stories, What We Were Doing and Where We Were Going, and his translation of Jon Fosse’s novel Aliss at the Fire.

Dalkey Archive Press, founded in 1984, is a distinguished independent press based at the University of Illinois. It is committed to publishing work that has been ignored by mainstream publishing, and its list includes William Gass, Harry Mathews, Henry Green, David Markson, Ben Marcus, Gilbert Sorrentino, Flann O’Brien, Djuna Barnes, and many others. In their National Literature series, Dalkey publishes two to four books per year from a specific country over a period of five years; Hebrew, Catalan, Norwegian, Slovenian, and Swiss series are currently underway.

With the support of the Office of Cultural Affairs, Consulate General of Israel in New York